What can tourists do to help Nepal’s quake recovery?
We had long discussions about the fact: If and how we are going to publish an article about the recent earthquakes and the current situation in Nepal.
But now after long conversations with a lot of Nepalese people we do have to say: Travel to Nepal
Tourism is critical to Nepal’s economy. The World Travel and Tourism Council reports that the industry contributed 8.9% to Nepal’s GDP in 2014, supporting 1.1 million jobs. Before the earthquake, Nepal was the 26th-fastest-growing tourism economy out of 188 countries.
So the answer to the question “What can tourist do to help Nepal`s quake recovery” is quite easy. Travel to Nepal: Come, visit the country and spend some money here!

People asking us: Why you` re travelling in Nepal? Everything is destroyed and the people have other things to do then to take care of tourists.
We have seen the pictures of the first earthquake and we witnessed the second one. But beside the fact, that the earthquakes damaged a lot of houses and killed people at the Kathmandu region, the rest of the country is down because of the lack of tourists. Pokhara is almost as empty as other regions are. If you consider that tourism is the main income source in Nepal, you can imagine that there is another catastrophe going on after the earthquakes.
Hotels, guesthouses, restaurants, trekking companies and traders – All are empty and so the pockets of the local people working there. Streets are empty. A lot of shops are closed.
A lot of people told us, that they haven`t earnt any money since the earthquake, because their job are related to the tourism industry. As they do not live in the affected regions, they won`t get any money from the donation funds.
“Tourism provides more than half a million jobs for the Nepalese,” Bohara told Quartz in an email, so if the earthquakes scare tourists away, that will have a major impact on the economy.” (Link)
If you consider that you maybe get a clue that the situation becomes worse and worse for the people now.
We meet Krishna. He moved to Kathmandu from the east to work as a trekking guide. For sure he gets just money, if he`s booked for a tour. He supports his family at home with the money he earns here. Since the earthquake he hasn`t got a single Rupee, because all tourists canceled.
That just one story out of dozens, we`ve heard so far. They all can`t claim for money out of the donation funds, because they belong to none affected areas.

A few local begged us to blog that tourists should come to Nepal. We always tell them that people are afraid because of the pics you see in the news. There it looks sometimes that whole Nepal is destroyed. That`s not true!
The earthquakes “Just” affected the areas around Kathmandu much and even if you`re in Kathmandu it`s not like there is no city any longer. Houses which were not build solid enough came down. Spending one week at the inner city near Thamel we saw 30 destroyed buildings.
We don`t want to say that that wasn`t a big catastrophe, we just want to say that actually you can travel there and people need the money from the tourists as well. Around Thamel all guesthouses, restaurants and shops are fine, waiting for tourists.
We are telling the guesthouse owner about the article. He appreciates that we write this. We have been the first guests since weeks. He is quite excited today because a second guest will come. That not enough to get the running costs in, but better than nothing.
Andy the Swiss guy arrived. He came to help. He`s now a volunteer of the “Nepal Survivors Funds” and started his work.
It´s very good that people like Andy existing in the world. They see, come and help!
But still – no money for our friends, for example in Pokhara. Not everybody has the time to volunteer. Visiting the country for holidays and spend some money here would help as well.
Here a statement from the Nepalese Government released at May 13 th.
„We would like to assure that Nepal is safe and secured place to visit. We encourage all tourists to visit Nepal and through this to help Nepalese people who are in trouble in this devastation.“ 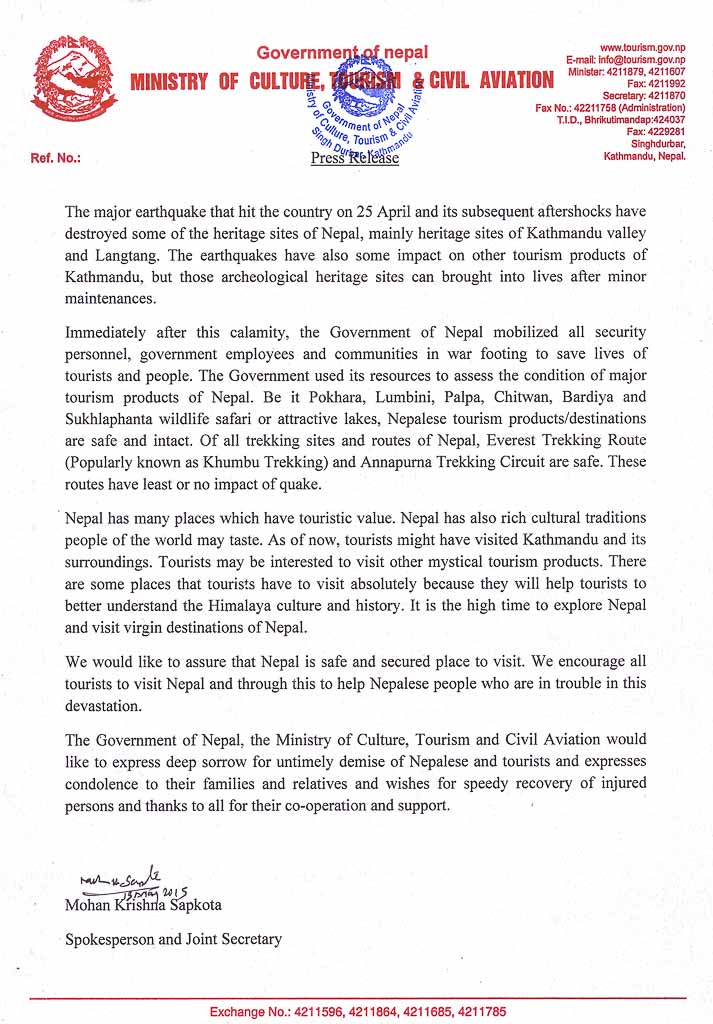 This article is for all our friends in Nepal who are desperately waiting for tourists.