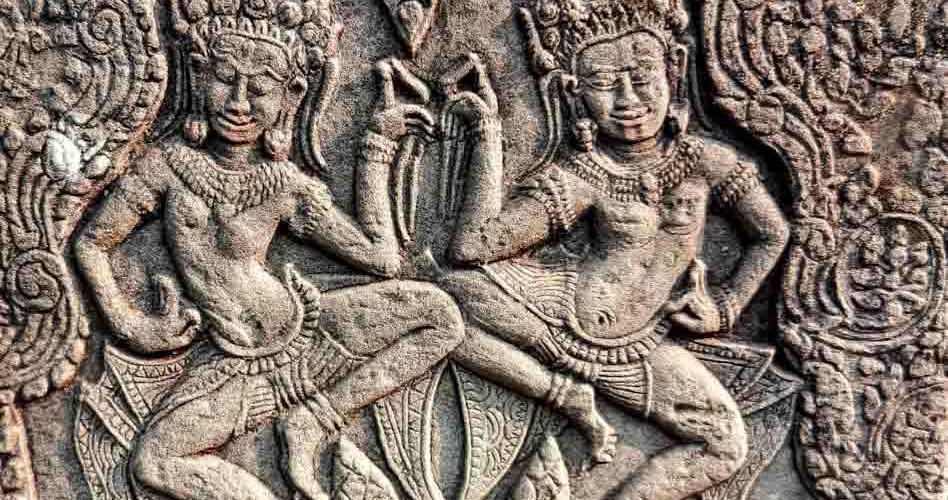 Home » Asia » The Temples of Angkor

We are again at Angkor – the third time already. If you want to know why someone come back here three times, keep reading.

The Temples of Angkor

Our first visit of Angkor was back in 2007 and we were one of “just” 900.000 visitors a year. However the number of people is increasing every year. In 2014 already 2.4 million people from all over the world visited the temple of Angkor. It is a quite massive increase and you can see the difference between 2007 and 2015 everywhere. (Quelle: tourismcambodia.org) Although the number of visitors increased the entrance fee is still the same: 20USD for a day, 40USD for three days.

So why did we come back again, when we have seen all the temples already a few times and less crowded?

Is Loki to large or can we pass the South Gate of Angkor Thom?

This question is worth the journey, because important questions shouldn`t remain unanswered!

The temple of Angkor belongs to the most imposing structures built by humans.

The Angkor temples were built between 800AD to 1300AD. During this time over 27 kings ruled Cambodia and built several temples. The temples are thought to have been abandoned around the 15th century. They were built by the Khmer Empire which was one of the greatest powers in South-East Asia at this time. It is estimated that at its height of rule the population contained more than one million people, that means, it was easily the largest city in the world until the Industrial Revolution.

One of the reasons, which lead to the collapse of the empire, was maybe introduction of Theravada Buddhism.

The pillar of the Angkor civilization was supported by the religious belief of Hinduism and Mahayana Buddhism. The monarchs being regarded as the god-king were able to motivate the dedication of their people to serve the throne as a divine service. The empire’s extensive irrigation system and military troops required massive laborers and manpower to maintain.   The introduction of Theravada Buddhism in 13th century to the Khmers had turned out to hurt sublimely the basic foundation of the Angkor Empire in the long run. Theravada Buddhism taught the people to seek self-enlightenment, abandon worldly things and discourage any superstition belief which directly or indirectly means all deities and all evils.

The retreat from the concept of the god kings have led to a loss of royal authority and thereby to a lack of workers. The water-management apparatus also degenerated, meaning that harvests were reduced by floods or drought.

Other reasons are maybe: war with the Siam; increasing maritime trade which removed Angkor’s strategic lock on the region; over-population of its cities and climate change.

Angkor Wat – from Hinduism to Buddhism

Angkor Wat is the largest temple in an area of over 200sqkm with more than 1000 buildings out of the time of the Khmer. From outside you can`t have a clue how big this whole area is.

Angkor Wat itself is the most famous, the most majestic temple of the Angkor site and the emblem of Cambodia. It is a Hindu temple dedicated to the god Vishnu. The construction was start at the beginning of the XIIth century during the administration of king Suryavarman II. It lasted 37 years.

Angkor Wat is a miniature replica of the universe in stone and represents an earthly model of the Hindu cosmic world. The central tower rises from the center of the monument symbolizing the mythical mountain, Meru, situated at the center of the universe. The outer wall symbolizes the chain of the mountain surrounding the universe, the water representing the ocean beyond. The causeway which decorated with Naga balustrade symbolizing a rainbow and the bridge links the world of the human being to the paradise: the world of Gods.

After the collapse of the Khmer empire, Ankor Wat was the only temple which was still in use for Buddhism ceremonies.

It should not be so crowded around lunchtime. It is the best time to visit Angkor Wat.

The name means ‘Great City’. It was the last capital of the Angkorian rule. The temple shows the materialization of Buddhist cosmology. There are many temples and sites within the walls of Angkor Thom including the Bayon, Terrace of Elephants, Terrace of the Leper King and Prasat Suor Prat. Angkor Thom is enclosed by five decorative entrances. Each of the gates is crowned with four giant faces.

Go there in the morning before 8am, afterwards it will be crowded!

Unlike most Angkorian temples, Ta Prohm has been left in much the same condition in which it was found. the photogenic and atmospheric combination of trees growing out of the ruins and the jungle surroundings have made it one of Angkor’s most popular temples with visitors. The most impressive point about this temple is that it is as if the trees are consuming the temple day by day. The temple was made famous in the movie Tomb Raider.

Please DRESS MODESTLY! These are temples and some still in use.

The temples of Angkor are both ruins and temples, so you need to dress modestly.

You won’t necessarily be denied entry at the temples if you aren’t dressed modestly (I noticed plenty of visitors in booty shorts and string tank tops!), but do be mindful that this is an important religious site. Please show a little bit respect!

For more information about the temples see: wikitravel

“The Temples of Angkor”, a comprehensive, recently updated digital guidebook (available on amazon) that’s a handy primer for a ruins-focused visit. It has lots of advice for waving goodbye to the crowds.

The point of origin to explore Angkor is the city Siam Reap (in case you are an overlander, you can stay overnight with the tourist police next to the Angkor ticket station) situated 5 km south of the temple area.

The city completely adjusted itself to the visitors of the temples.

There is still a question unanswered, do you remember? The question is the reason why we came back to Angkor. Loki fits through the southern gate of Angkor Thom. It was quite narrow but we managed to get him through.

Another question arises now: Can Loki manage the Leh Manali Highway? An answer will follow soon.