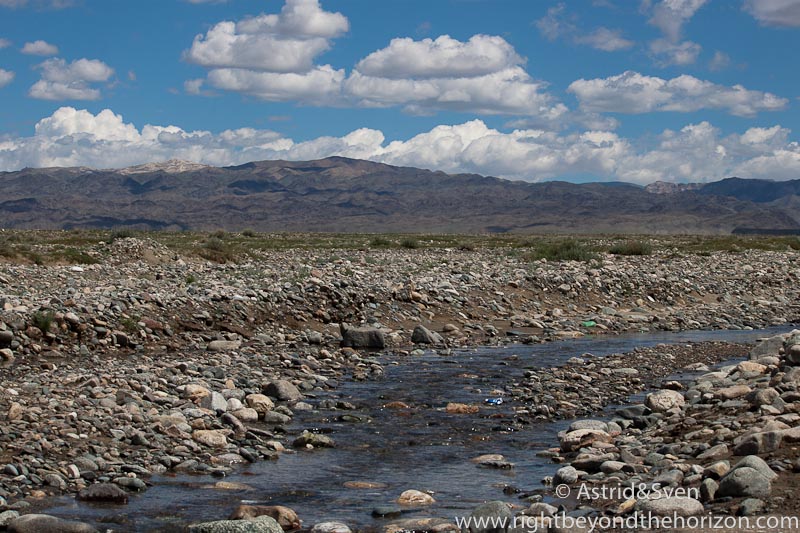 It is early in the morning. It looks like rain, so we decide to leave our overnight camp quickly, to escape. We estimate that we need roughly two more days to cross the desert to reach Altai, the next so called city. Only 20,000 people live there, but for this less populated country it’s a big city. It’s only 300 km away, but we don`t know exactly, what will await us, beneath the fact, that there is no street.

The valley seems endless. We see where rivers once were, the dry beds crossing the “path” the whole time. It’s endless up and down and it’s really hot and dusty. We have a choice of up to 20 roads in reality, but our GPS device just shows one and this one is two kilometers away in very deep sand. We guess at the tracking likely as somebody before us did. This track we’re on is old and the sand is moving the whole time. In one year or one month the road could be somewhere else entirely, but such is travel in Mongolia, the unpaved tracks a moving the whole time. You have to find the way by your own, otherwise it wouldn’t be the adventure it is, would it?

While trying to find our way, we see dozens of camels on and beneath the track. We try to be careful as they seldom move for cars. A lot of vultures fight for the careless  animals that should have moved. From time to time we can see gnawed off skeletons glimmering in the sun.

All of a sudden we found a good track, without stones and dry river beds, on which we are able to drive high-speed, which is relative as that means 40 km/h, but feels like high speed for us. But after just five minutes the GPS told us: off road! Yes we we were off road the whole time, but after a curve we could see that the track really lead in the wrong direction.

We fight through the sand back to the web of roads, all of which were “the main rod.” All together we spend five km and nearly half an hour to get back and in addition we worried the whole time we would get stuck in the deep sand. We proceed carefully, slowly.

At our first night’s camp in the desert we were accompanied by herds of camels, the only living creatures we had seen. After sunset the temperature fell rapidly to five degrees, nearly 40 degrees cooler than the daytime temperature and therefore it feels obviously colder.

The next day more weather arrives in the form of rain, and lots of it. The “main route” is flooded, a surprise to us given we were in the middle of a desert. The canyons were quiet deep, we didn’t want to have a rain experience here, it looked like a flood would wash everything away. We imaged how a lot of people underestimate the dangers in the desert.

Shortly before Altai a gorgeous landscape became visible. We left the desert for a moment and drove into the mountains again. The desert itself was between 1500 and 2000 meters high, but the mountains around were up to 5000 meters and sometimes covered with snow. But no trees thrive there meaning we haven’t seen a single one for a week.

The city, or as the Mongolian people call them, the “Aimag”, Altai is situated in a mountain valley at 2500 meters. After shopping and filling the tank we were rewarded with 120 km of paved road to the east. Our GPS denied the route claiming it didn’t exist despite seeing it before us. This time we ignore the “off road” callings from our device, the paved roads are good roads and very rare in Mongolia, so we enjoyed them while we could.

At the end of the day we looked for a place near the end of the paved road where we could oversee the whole valley and where we could see where other trucks were driving. We get stuck one time, deciding that’s enough. Without really knowing the valley, we would never have found the right track or even the entry of it. The valley is full of misleading tracks even though our map told us where to go. The rain returns and threatens more mud, more floods and more challenges. We should have expected this as it was the rainy season in Mongolia, but who would have expected this in a desert. We camped for the night, the paved road not far from us. The track we were on ended in a swamp, a dead end leading to nowhere, for no reason.  This is why they call it an adventure.