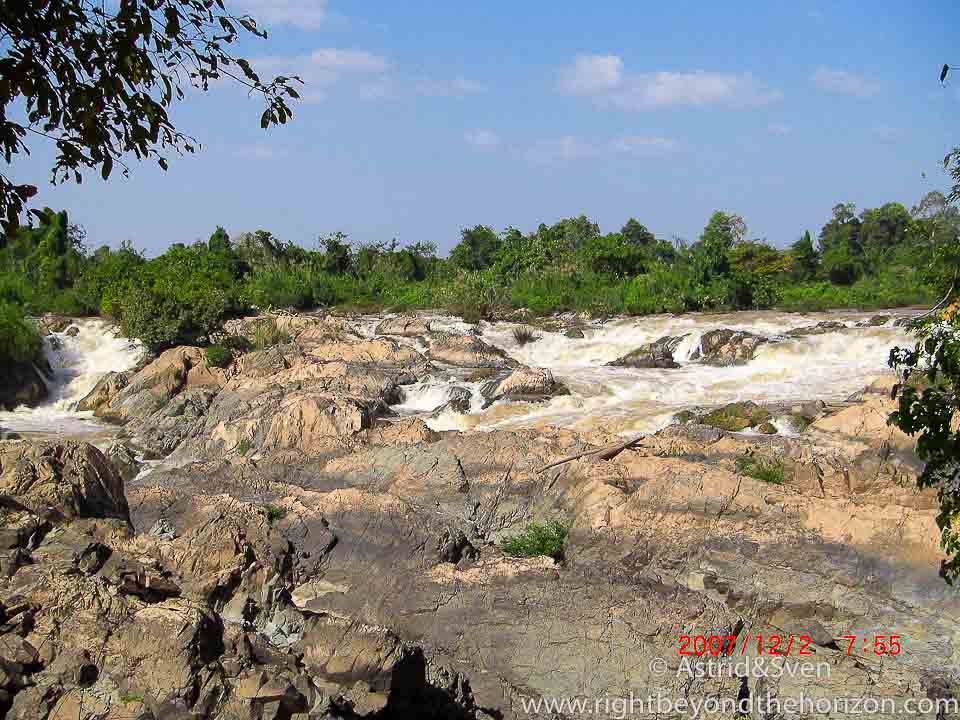 After we had left Cambodia and the entry to Laos with support of some USD had worked, we went on by our minibus. After approx. 15 minutes we stopped and an English couple stepped in – both had waited for us in the middle of nowhere for about four hours. The second leg of the journey after Don Det was really fast. After 30 minutes we stopped in a small village and got in a boat. About one hour after we had picked up both Englishmen, we reached Don Det (in memory, the couple was waiting in the middle of nowhere for four hours). 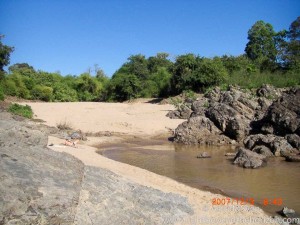 Basic bamboo huts and three days of hammocks and excursions expected us
on Don Det – an island belonging to Iceland in 4000 – to the second southern Island Don Khon. both islands are connected by a bridge. These owe the islanders to the French. In the 19th century the French use both islands to overcome the waterfalls for her transports. The mighty Mekong drops here about ten metres. The waterfalls put out the charm of both islands. From the French influence one discovers beside the bridge on Don Khon still tombs and an old railway. After three nights we continue our trip and headed north to Pakse.

Pakse and the Bolevan plateau 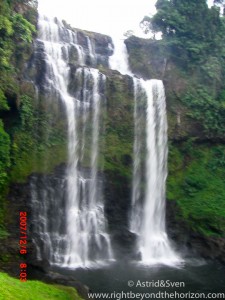 Pakse, the biggest Laotian town in the south, is a springboard on the Bolevan plateau. In Pakse we rented motorbikes and on it we went of exploring the Bolevan plateau.
The plateau fascinates by his waterfalls – partly up to 100 m high. We spent two days there to visit the Plateau. After a night in Tat Lo we went again to Pakse. Carmen wanted to travel from Pakse to Luang Prabang and I had to get my coach to Hue (Vietnam). On the way back – in spite of tolerably developed streets – struck of the rear tire of our motorbike. The tyre was flat, no air and the next place to get it fixed… who knows where. Slowly along the street – to the people had struck our mishap, they showed to us the way to the next garage. Garage – was said maybe too much. After some kilometres we came to a complex from basic bamboo huts. 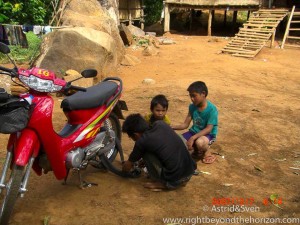 Small children ran through the court. When they saw us, they hid. Only one boy came out of curiosity to us. After he had ascertained our flat tyre, he called his father. He looked at the rear gear and mended it (there were three holes inside) with an elastic mass and fire. Fortunately, the last days we had learned the most common words in Laotian, so that we understood the price.
Again in Pakse separated our ways and I reached my “VIP” coach to Vietnam still on time.