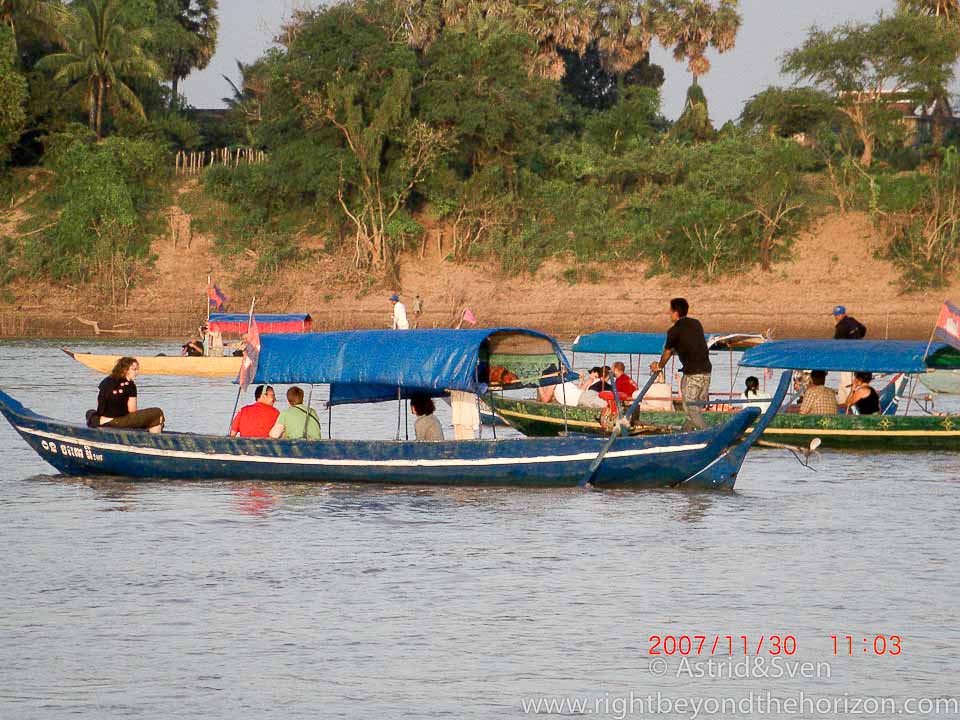 Bleary-eyed I arrived in Cambodia (airport Siem Reap). The border modalities at the airport turned out unproblematic. Also the “search” for a lodging was quite simple . From the airport I took a moto bike for the way – while driving on a well developed street I led past five-star hotels and building sites –  so I finally reached my Guesthouse for the next days.

Historical testimonies of a lost civilization – built for the eternity… 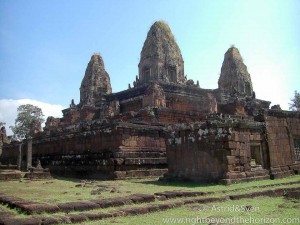 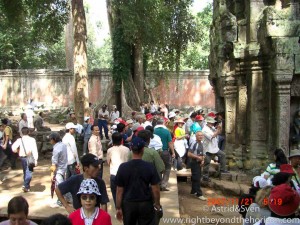 When you enter Ta Phrom  – probably one of the most famous temples (from Tomb Raider) –inevitably it raises the questions, how have the first discoverers felt here. The temple overgrown by plants, the walls have given way to the mighty roots of the giant trees. Deserted – well almost! Once in a while one to two groups of Japanese, Germans, Koreans, French etc. could get lost in the temple. In spite of that I jumped from stone to stone hoping to find an untouched spot of nature. I tried to stabilize the walls, which were in a collapse-endangered condition. Later I even met descendants of the temple residents. Actually I was permitted to shake  hands with one of them.

Then after the days in Siem Reap I continue travelling, with the Speedboat via Tonle Sap to Phnom Penh… 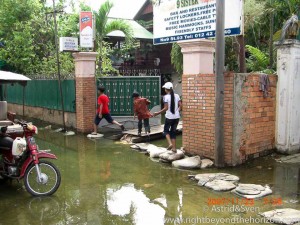 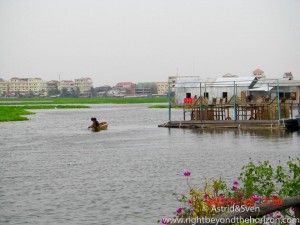 After we had conquered some big puddles and lakes, we already reached our Guesthouse. In the room a few ravenous mosquitoes expected us. But the view from the terrace compensated really for everything.

To understand Cambodia a bit, the visit of S21 and the Killing Fields is an obligation. A country, where the history of the Pol Pot regime in the 70s has left such a heavy mark to the people. Here I can recommend the book of Manfred Rohde „to resignation of the Killing Fields – long way of Cambodia in the normality“. It illustrated, in my view, the perversion of the civilwar and from political interests driven foreign affairs…. I spent the evening to sort the impressions I gathered at one of the darkest moments of the history of Cambodia… a reflection on the immense impressions was out of question right now.

Olympic swimming-pool and the Water festival 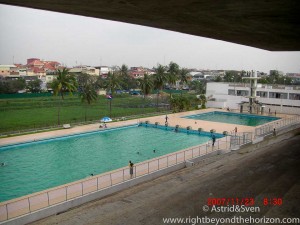 The next day it pulled me – driven by a little bit sporty ambition – in the Olympic swimming-pool of Phnom Penh. Situated in the old Olympic Centre – Olympic Games took never place here, however –you could face the pool`s age, but outdoor and quite nicely.

It seemed only children were playing in the swimming-pool. After I had paid the usual foreign price – One USD – at the entrance, I went into the water. From the left and on the right I was examined. Children were attempted to grab me and I heard several voices asking: “Hello, What’s your name?”

In Phnom Penh  the Water festival took place these days- the official resignation of the rainy season. The town expected three million visitors! I can say a chaos! But to explain this, go beyond the constraints of this article…

Due to the closed embassy of Laos – the Water festival is to blame for – and the necessary visa for Laos, it was drawn forwards to the beach of Sihanoukville, even when it was only for a couple of days.

Sihanoukville I felt on the one hand as “Mallorca” of Cambodia (if one is allowed to do this comparisons) – on the other hand, a relic of the old drop-out’s generation, over swashed from Thailand. I remained with last-named. 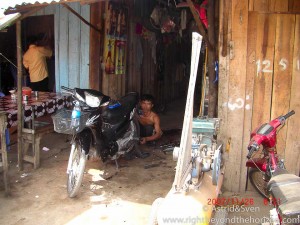 On the second day we wanted to follow the hint of the travel guide and explore a quiet beach,  North of the town. The water was fantastic! Beach? Was almost not existing and what you could have called a beach, was all over with garbage… So much to insider tips of travel guides. OK, we went back to another beach, and then happened… I would say  “Shit of mouthful”.

The rear tire was flat. Now, we stood there, far from every civilization, at 35 degrees in the shade. It took some time that somebody, who drove down the street, took us to the next village. Then everything happened very quickly. For five dollars we got a new tire and the journey kept going further to the beach.

Walking around in pajamas – soon also fashion in Germany?

A fashion trend, which seems to establish here in Cambodia is walking around in pajamas. Everywhere it is to be observed. At the first time I saw it, I thought, it was limited only to small children who forced to go to bed immediately, but more and more adults were tapping into this trend. A clear rise of the pajama prices was to be observed here subsequently. I hope, I still get one, I do not attract attention.

Back in Phnom Penh (Cambodia)

After the extended week-end in Sihanoukville it pulled me back to Phnom Penh. I happily looked forward to my visa for Laos, so I sauntered through the town on the first day back.

One evening – I believe it was Tuesday – I was surprised by the news that the embassy had to do more important things then giving me a visa. Dirty trick – but everything has a sense. So it was an unexpected day more in Phnom Penh. Further sightseeing! I just took it easy, read a newspaper, laid down in my hammock, exchanged traveler stories, slept and full of optimism, booked the coach for Thursday.

However: first everything comes differently and secondly than you expected. The next day in the afternoon over 40 degrees fevers – nothing becomes fine with the second part of the journey. Off to the doctor – antibiotics, a lot of sleep and on Thursday the world looked again different or I looked better.

Then, finally on Friday I left Phnom Penh with 5-day delay to Laos. In the Guesthouse I had met Carmen (South African, Austrian passport in London living). She accompanied me, because she was travelling in the same direction.

Friday we moved over to Kratie, watching freshwater dolphins. 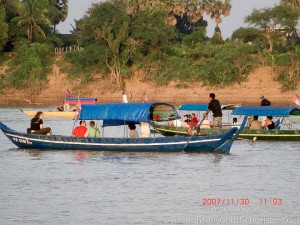 In the evening Carmen and I met Paul (English, Australian passport 57.5 years old, retired, motto: “Travelling is cheaper than living in London”). He also planned to travel in the same direction, further to Laos – more exactly Don Det.

At the next morning we were fetched by bus on time around 6:30a.m. – in front of our hotel. After a longer drive and some stops in front of other hotels we stopped finally about 8 o’clock directly behind our hotel. Departure time: 10 o’clock. Well, next time I will search –the coach station, then I can sleep longer.

The journey towards to Laos led us in our florid minibus over a well developed street to the North. Just before a bridge – it looked already completed – we had to change on a ferry to cross the Mekong. Again in the coach – another one this time – we reached to the border to Laos soon. On the Cambodia side a dollar was called. Why? We asked ourselves, today is Sunday said the official…, however, it was not. After longer discussion we received our stamps and might pass without paying a USD. On the other side the same play. The difference, we must enter Laos, back to Cambodia was not possible – necessarily we had the choice to pay one Dollar or to spend the night in the “no-man’s land. – OK simply… we pitched our tent! No, we paid one USD per person and entered Laos.