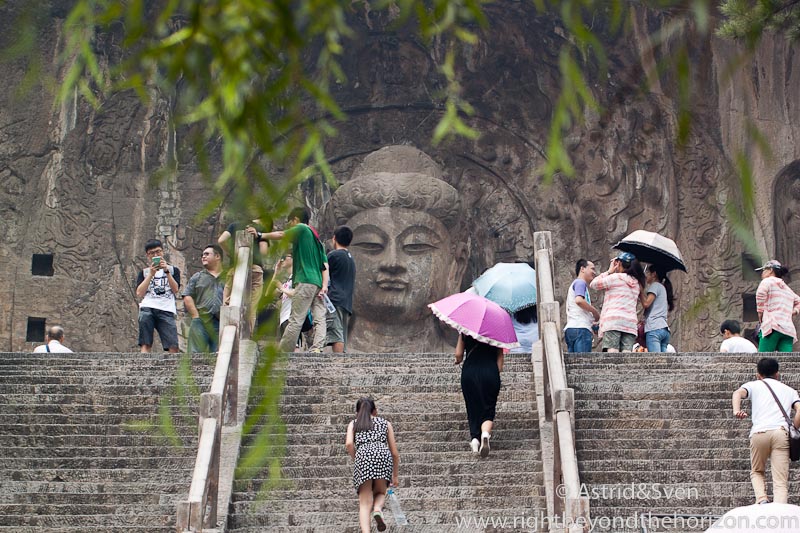 From wooden pagoda in Yingxian, to the family farm Qiao, to the old town of Pingyao, to the Longmen Grottoes and the Terracotta Army in Xi’an. 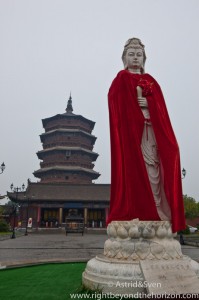 This morning the sky is overcast with clouds. It rains. The first time since the beginning of our trip in April the sun does not wake us up. The wooden pagoda in Yingxian built in 1056 – a masterpiece of Chinese architecture – looks dulled. A female Buddha dressed with a red cape and two streets of the Chinese old town look more inviting. We decide to save the 20 euro entrance fee and we are exploring the area around the pagoda.

For this day are still two more sightseeing stops and a 300km ride on the agenda. Actually too much for one day. After a short discussion, we choose to quit one of the sightseeing points – a temple.
Toni, our guide has chosen the national road. A very old part of the Great Wall is on the way. 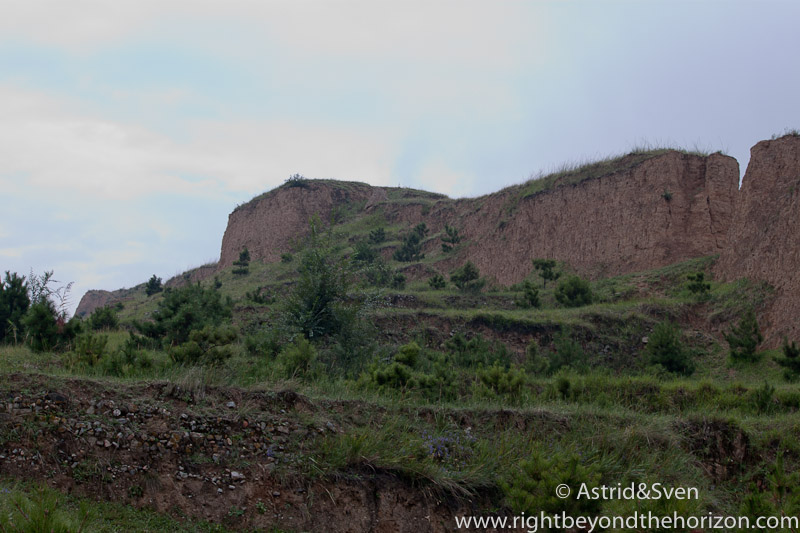 Not only is that section of the Great Wall of China, but also the route very scenic. Behind the Great Wall, the road climbs a mountain. The curves are relatively narrow so that it always leads to small jams.
We are still very far from the present day target. Eventually Toni decides that we must drive the highway. It is already dark when we reached the family farm Qiao. The Qiao family was the founder of the first Chinese bank and the family home is open to visitors. For about 10 EUR per person you can explore the house (with more than 600 rooms) and go shopping later at various souvenir stalls.
We stay the night at the parking lot. All in the group are exhausted. The last days were long.
We didn`t visit the family house. The described impressions of others from the group confirmed our decision. 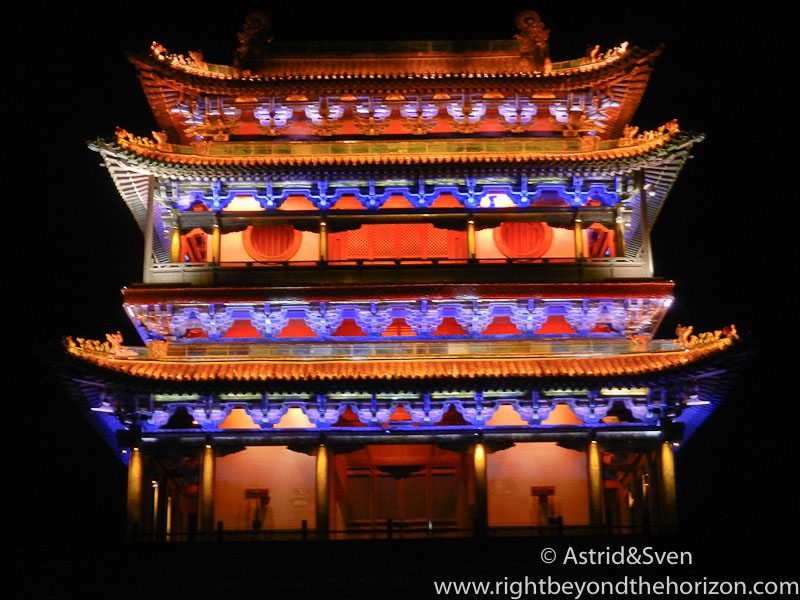 We spent two nights in Pingyao. The old town is a UNESCO World Heritage Site. Ping Yao is an exceptionally well-preserved example of a traditional Han Chinese city, founded in the 14th century. Its urban fabric shows the evolution of architectural styles and town planning in Imperial China over five centuries. We are right next to the tourist center inside a beautiful park. The old town is very nice to look at, but like all previous places extremely touristic. With thousands of Chinese people we walked through the town while we pass countless restaurants and souvenir shops. A little of the original town can only be found in the streets along the city wall.
At the evening the temples and the city gates are illuminated. Inside a bar, we meet Steffi and Christoph from Munich. They have been traveling with the Trans-Siberian Railway to Beijing and now they go further through China.

Our journey continues towards Louyang. The Longmen Grottoes are on the agenda. The caves are suited along a river. The Longman caves are one of the finest examples of Chinese Buddhist art. Housing tens of thousands of statues of Buddha and his disciples, they are located 12 kilometres (7.5 mi) south of present day Luòyáng in Hénán province, China. The images, many once painted, were carved into caves excavated from the limestone cliffs of the Xiangshan and Longmenshan mountains, running east and west.

Because only Ruth and Walter want to see the famous Shaolin Temple, they have to drive the 2 hours ride alone, while we stay at the river and relax. 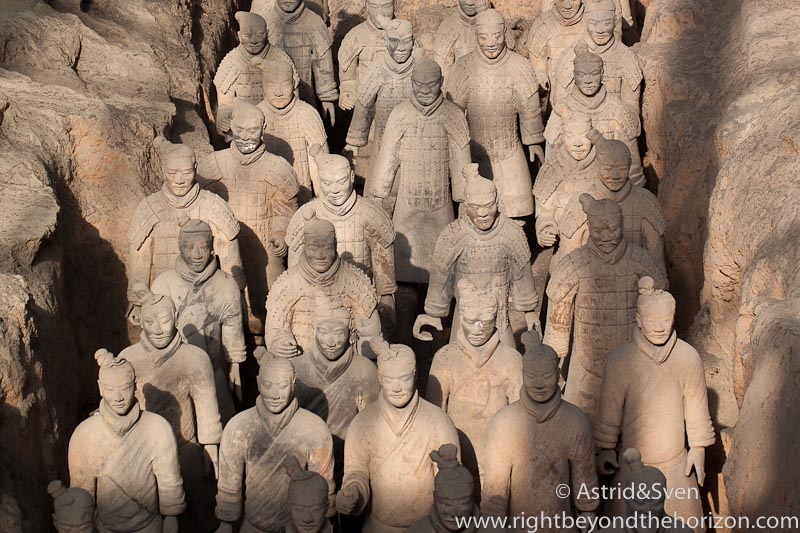 Our next highlight is real highlight: The Terracotta Army near Xi’an. The massive project will probably still occupy generations of archaeologists. The Terracotta Army or the “Terracotta Warriors and Horses” is a collection of terracotta sculptures depicting the armies of Qin Shi Huang, the first Emperor of China. It is a form of funerary art buried with the emperor in 210–209 BCE and whose purpose was to protect the emperor in his afterlife.

Local farmers in Lintong District, Xi’an, Shaanxi province, discovered the figures, dating from approximately the late third century BCE, in 1974. The figures vary in height according to their roles, with the tallest being the generals. The figures include warriors, chariots and horses. Estimates from 2007 were that the three pits containing the Terracotta Army held more than 8,000 soldiers, 130 chariots with 520 horses and 150 cavalry horses, the majority of which remained buried in the pits nearby Qin Shi Huang’s mausoleum. Other terracotta non-military figures were found in other pits, including officials, acrobats, strongmen and musicians.
Tomorrow we`re going to visit the Chengdu Panda Bears.