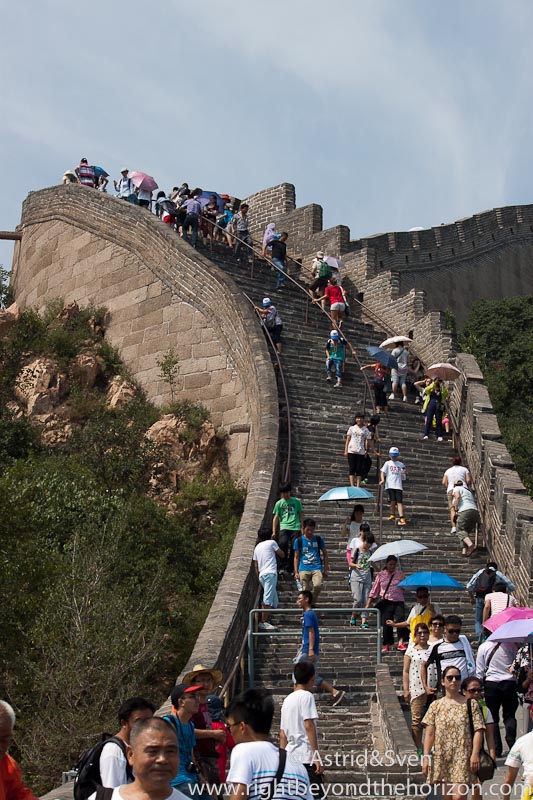 We leave Beijing early in the morning. For the next few days a lot of miles and attractions are on the agenda.

Our first aim for this day is the Great Wall of China. The Great Wall of China is a series of fortifications made of stone, brick, tamped earth, wood, and other materials, generally built along an east-to-west line across the historical northern borders of China in part to protect the Chinese Empire or its prototypical states against intrusions by various nomadic groups or military incursions by various warlike peoples or forces. Several walls were being built as early as the 7th century BC; these, later joined together and made bigger and stronger, are now collectively referred to as the Great Wall.
Approximately 40km far from Beijing, is the most famous section. Already we see expanses of the Great Wall which winds through the mountains. The section here is almost completely restored. We probably are a little too late. Some parking lots are already overcrowded – Chinese holidays. After the entrance you can decide to climb the north or the south route. The southern route is probably the most known section and immortalized at many paintings. From here you can look, with good weather and no smog, to Beijing. But after a few towers the people jam here. We turn around and look for the “loneliness” on the other route. This passage is extremely steep and therefore probably not so much frequented. We move forward and reach the end of the restored section. We have an incredible view on the Great Wall and the mountains around us. Back at the parking lot, a huge amount of people and police officers are standing around our cars. It takes some time until we realize: There was an accident. A Chinese driver hit the Toyota of Walter and Ruth. The damage to the Buick (Chinese) is significant, while the car of Walter has only some small paint scratches. Yes, German workmanship. (Note: The structure of Suri 2 was manufactured in Germany.) After the formalities have been completed and Walter has got his accident report, we can continue to Datong. 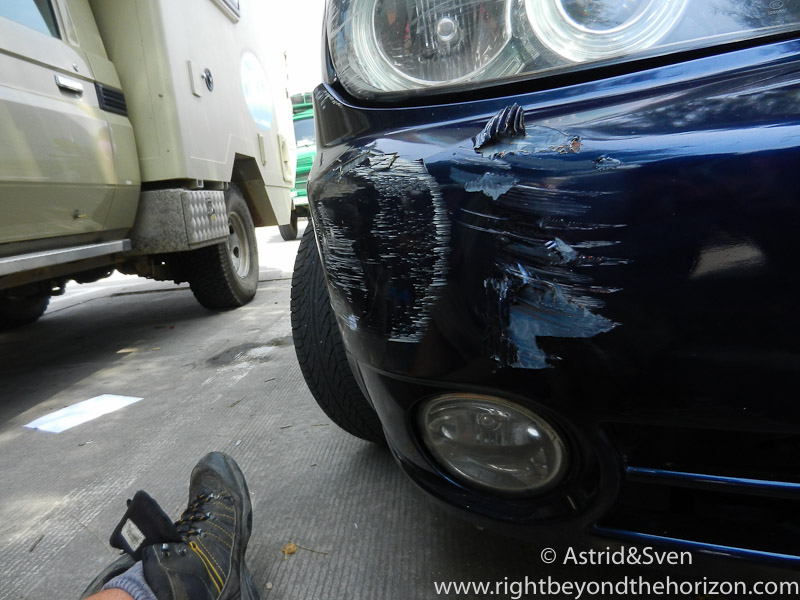 The trip to Datong takes us through a beautiful landscape and we get back to the undivided interest of the Chinese drivers. They brake in front of us and beneath us same time, only to take pictures – on the highway. The situation gets a little bit dangerous. We stand on the brakes all the time. Later in the evening we reach Datong and the Yungang Grottoes. 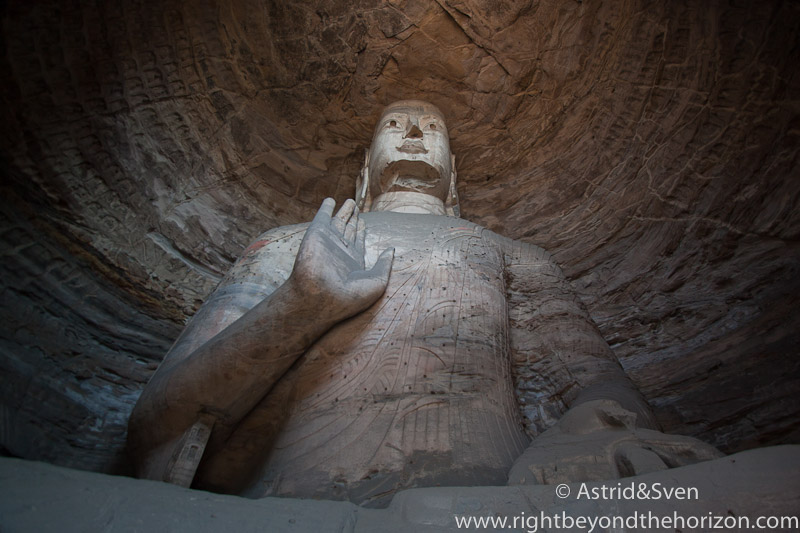 Too late for a tour, so we set up camp just off the Caves in front of a small cave. The cave is filled with many religious offerings. It’s like a miniature version of what awaits us in the Yungang Grottoes. Admission is – as we think – with 120Yuan (15EUR) very expensive. At about 5,000 visitors a day, the organizers have the money used to build a beautiful temple in front of the real attraction. The Yungang Grottoes are known for their countless Buddha’s in various sizes that were carved into the rock. It is breathtaking.
The Yungang Grottoes with their 252 caves and 51,000 statues represent the outstanding achievement of Buddhist cave art in China in the 5th and 6th centuries.

Hanging Monasteries. The next sightseeing point is the Hanging monasteries. But before leaving we go for a meal. It is lunchtime. We are again the main attraction in the restaurant. Toni ordered. It is again delicious, good and cheap. For just over 20EUR we get food for nine persons.
In the evening we reach the hanging monasteries. The monasteries are built into the mountain wall and sit majestically above the valley. We didn`t went into. EUR 20 per person is too much us. Built more than 1,500 years ago, this temple is notable not only for its location on a sheer precipice but also because it is the only existing temple with the combination of three Chinese traditional religions: Buddhism, Taoism, and Confucianism. The structure is kept in place with oak crossbeams fitted into holes chiseled into the cliffs.

That evening we drive just further 50km to Yingxian. There is the world famous wooden pagoda on the agenda for tomorrow.