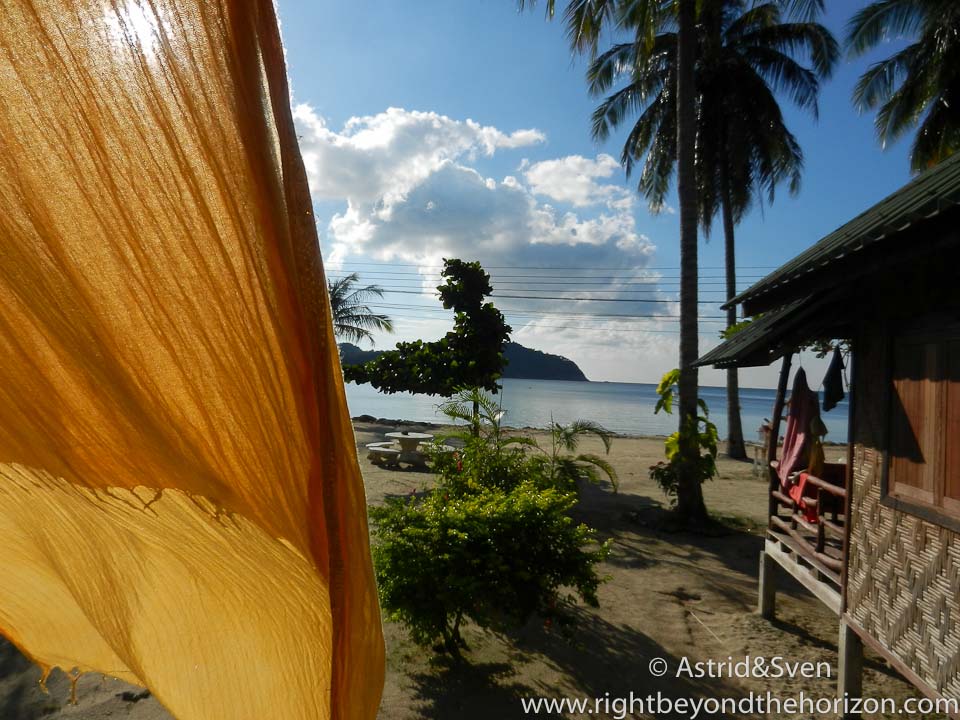 After our stay in Pai and in Siem Reap it pulled us to Chaloklum.

The journey to Chaloklum

Admittedly the nerves can be strained after 36 hour journey, of it at least ten in the neon-illuminated seat metropolitan area compartment and other six on a congested mini-ferry with driving problems. One tip by the way: You should travel in Thailand always anti-cyclical to the Full Moon parties on Koh Phangan or simply book your tickets early enough, then you will also get a bed in the sleeping compartment.

If you desire furthermore, to get a nice bamboo hut, not to expensive, with hammock, sea view and diving school, the conflict potential rises.

However, in this point you can also count again on the unexpected Thai organization talent. After you step off the ferry, you will become immediately reshipped – if you have already decided at a bright moment at which end of the island you would like to stay – in a breezily Songthaew, depending on where you would want to go – and roughly twenty minutes later you will stand on the beach, by your own feeling, the most superb in the world and after short footpath you have, in most cases as well, the nicest bamboo hut in the world – with hammock and a connected restaurant – all of this, for an affordable price. We had decided to spend our time for the above reasons (diving school / Dive of Inn) in Chaloklam, a (still) small sleepy fishing village (at least in the low season) in the North of the island. Beach on our right – on our left a fish factory …. which leaves their mark.

Koh Phangan is well known for his Full Moon parties on the beach of Haad Rin.

Once we decided that we must also have visited one of the uncountable parties. So it was that we entered one of the „Half Moon parties“ in the jungle – yes, you can always celebrate on this island. To get there, we hailed a taxi on the street, back – organized again very well – in a Songthaew.

How are the days on this part of the island? Hanging around… best of all the whole day – with sea view, beer and sun downs. In the end you are getting lazy and sluggish and the walk to nearest SevenEleven fells like a giant walking-tour. 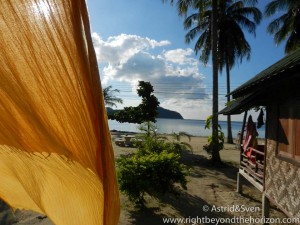 Here, just interrupted by excursions around the not to big island, you live very well. As we rented a scooter, we paid attention – German as we are – to already existing damages – after 10 scrapes and scratches we stopped counting. We thought, we could lay the blame for the next few scrapes on the previous owner. In this way we should be safe anyway. Also the information on the subject “Safety driving” are rather adventurous: From  „Only front seat passenger must wear a helmet “ to, „nobody must wear helmet in general, but if the police comes – and it comes only to Thongsala – then the co -driver have to put on the helmet to the driver as fast as he can“ we have heard everything. Lastly we never carried helmets – indeed, you must know that on Ko Phangan the main cause of death are falling coconuts, directly followed by traffic accidents, caused by sandy slippery subsoil. 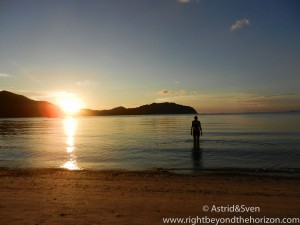 If you get, however, a courageous capable driver on your side, you can also dare to set off from the prepared streets and to take the small sandy eroded jungle streets, to see the gorgeous miracles of the island. Particularly the Eastern part of Koh Phangan offers incredible romantic lonesome beaches.

We were sent to the Thaan Prapaad Waterfall. After a small hut in which you can supply yourself for the last time with drinks and the warning words, that the way to the waterfall is short, to the beach, however, long and dangerous, we went off. 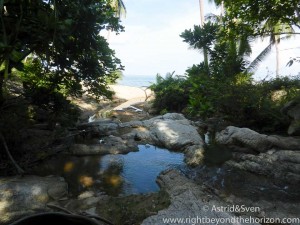 The way to the waterfall WAS SHORT, at 40 degrees of heat, however the way war also not un-strenuous and hardly – more a small beaten path than a way. At the waterfall – before the rainy season rather a little rill, you asks yourself … and where is this way to the beach now? Either Thais learned of Bavarians, or the other way around – the way was colored with little points to show the right way. We have dared to venture the descent … and what expected us, recompensed us really for the efforts: A deserted gorgeous beach. Although the Robinson feeling softened by the tracks that can only leave human life….but it is so less than you can forget it. Early enough you should begin the descent if you like to spend the day on the beach – the sun sets early and a rise in the darkness – I do not recommend it.

In the darkness you should stop at Lek `s. He has opened a reggae bar in an itsy-bitsy bamboo hut at a turnoff to the beach, with two seats and a fridge full of beer and a computer with incredibly a lot of music, which all possible tourists have given to him. Lek fancies, by the way,  “women with glasses” – because they are intelligent „very“.

After 10 days we had to leave the paradise. Return with the car-ferry to Suratthani and night coach back to Bangkok.

For all divers: For a brilliant dive, go to Sail Rock. There are gigantic shoals of barracudas and bat fishes. In April – with a bit of luck – there is sometimes a whale shark.